The all-new Domane is built to respectfully challenge Flanders and Roubaix with three groundbreaking technologies that will irrevocably alter the time-honored battleground of the cobbled Classics: Adjustable rear IsoSpeed, front IsoSpeed, and IsoCore handlebar.
With these three innovations, Domane delivers a new convention of race comfort and compliance. And the proof lies in performance. Trek developed and tested the new Domane with the Trek-Segafredo Pro Cycling Team at the source—on the fabled cobbles of the Arenberg Forest and the climbs of Flanders—then reproduced a 100-meter-long replica of this terrain in their Waterloo headquarters for further validation and testing.
The result of these efforts is a trifecta of astounding technology that dissipates vibrational energy better than any other race bike, providing a 14% increase in rear compliance at the lowest adjustment, 10% additional compliance at the front, and a 20% increase in vibration dampening over a stock carbon bar. Together, these technologies deliver a ride quality that until now was only a distant dream of the world’s finest racers. No bike in the past or present is better suited for cycling’s greatest demands, because no bike has ever equaled Domane’s technology and capability. 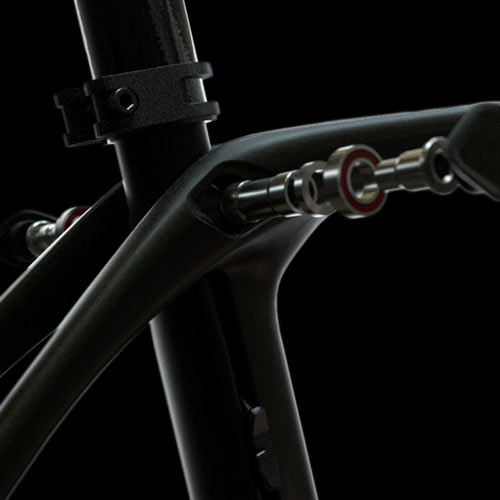 Trek’s IsoSpeed technology smoothes even the roughest roads, delivering an efficient and comfortable ride for increased performance and speed. Adjustable rear IsoSpeed allows you to fine-tune your compliance level to suit your ride style and terrain, providing a greater range of compliance than the current Domane and a 14% increase in overall compliance when the slider is in the lowest setting. 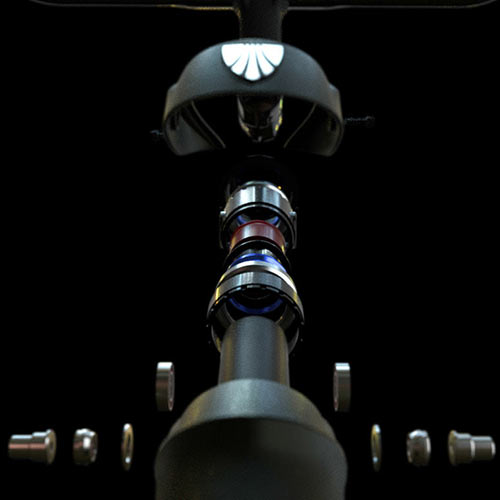 The innovative front IsoSpeed decoupler delivers the perfect smooth and balanced ride, so you can ride faster, longer, and stronger. By allowing the steerer tube to rotate independently from the head tube, front IsoSpeed provides an additional 10% of front-end compliance over a traditional road bike. Front IsoSpeed reduces hard hits and vibration without sacrificing efficiency or control. 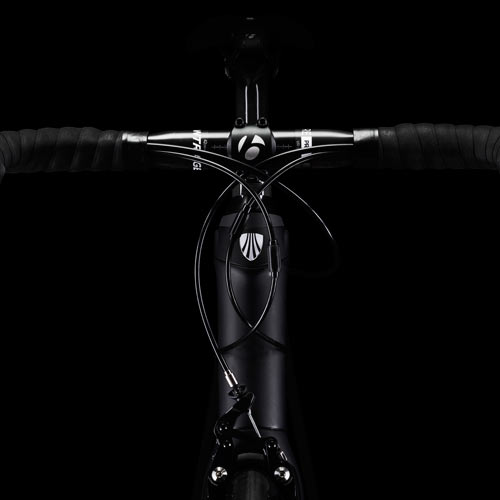 Bontrager’s IsoCore handlebar improves damping of high-frequency vibrations. A rubber compound specifically used for vibration-damping is included in the carbon layup at specific locations to optimize performance, creating a constrained layer damping system. This allows for the vibrational energy from the road to be efficiently dissipated before having a significant impact on the rider. 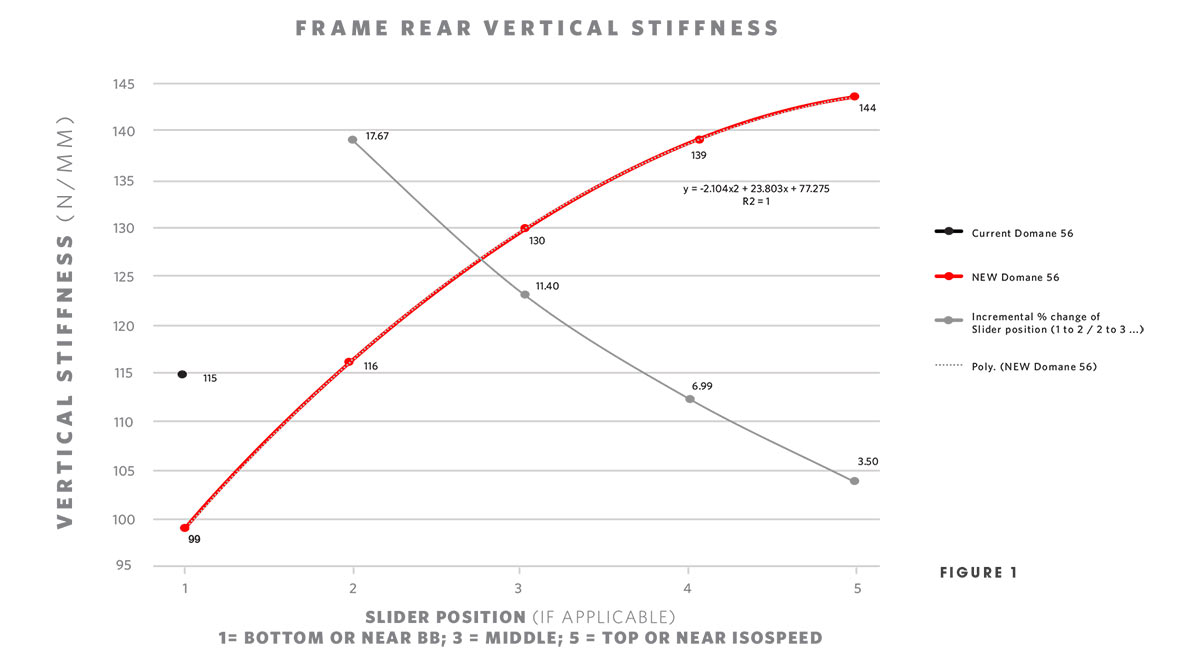 Trek’s Adjustable Rear IsoSpeed technology uses a pair of seat tubes, one integrated into the other, to create the smoothest ride possible. The tubes are connected via the IsoSpeed decoupler (top) and a bolted joint (bottom by the water bottle cage). A slider between the tubes controls fore/aft deflection between the two tubes, allowing you to control the compliance of your ride. 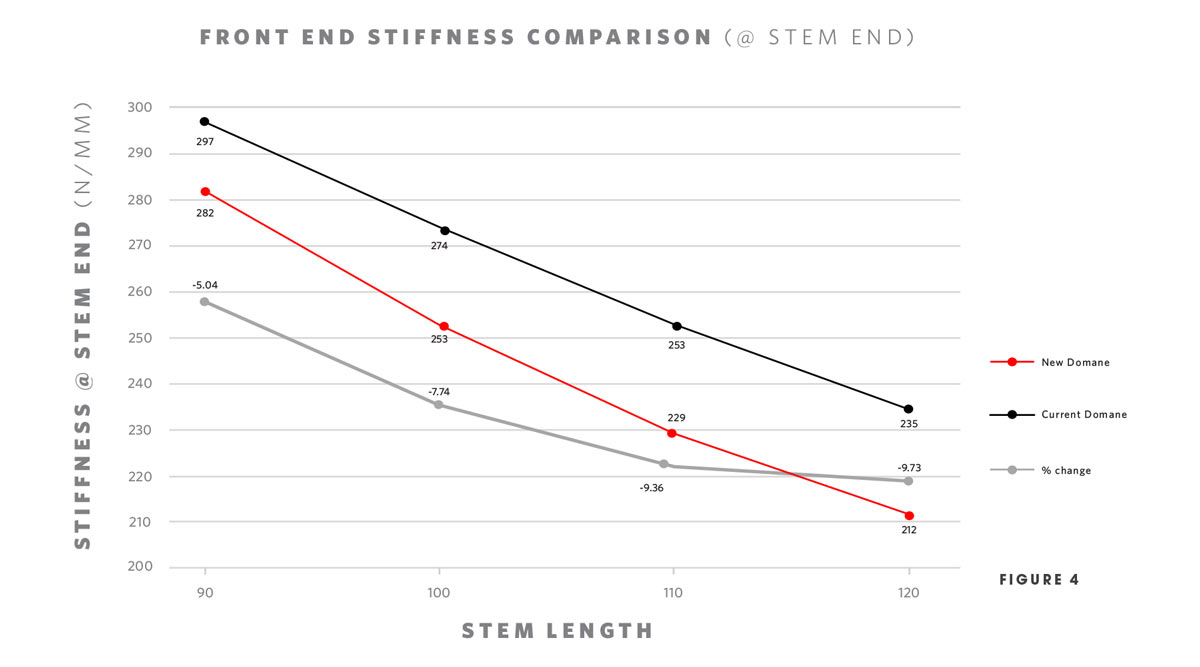 The aim of front IsoSpeed technology was to utilize the frame’s rear technology and apply it to the front end of the bike by isolating the steer tube of the fork. To help increase damping characteristics of the front end, an upper head tube system was designed that allows this fore and aft degree of freedom for the steer tube to properly flex.

The graph above shows stiffness at the stem faceplate with various stem lengths. The data was taken from numberous tests at Trek's indoor cobble track modeled after the cobbles of Arenberg. The new Domane delivers a 10% reduction in stiffness over the old bike. What's this mean to the rider? This means the front of the bike is more comfortable, allowing you to ride harder for longer. 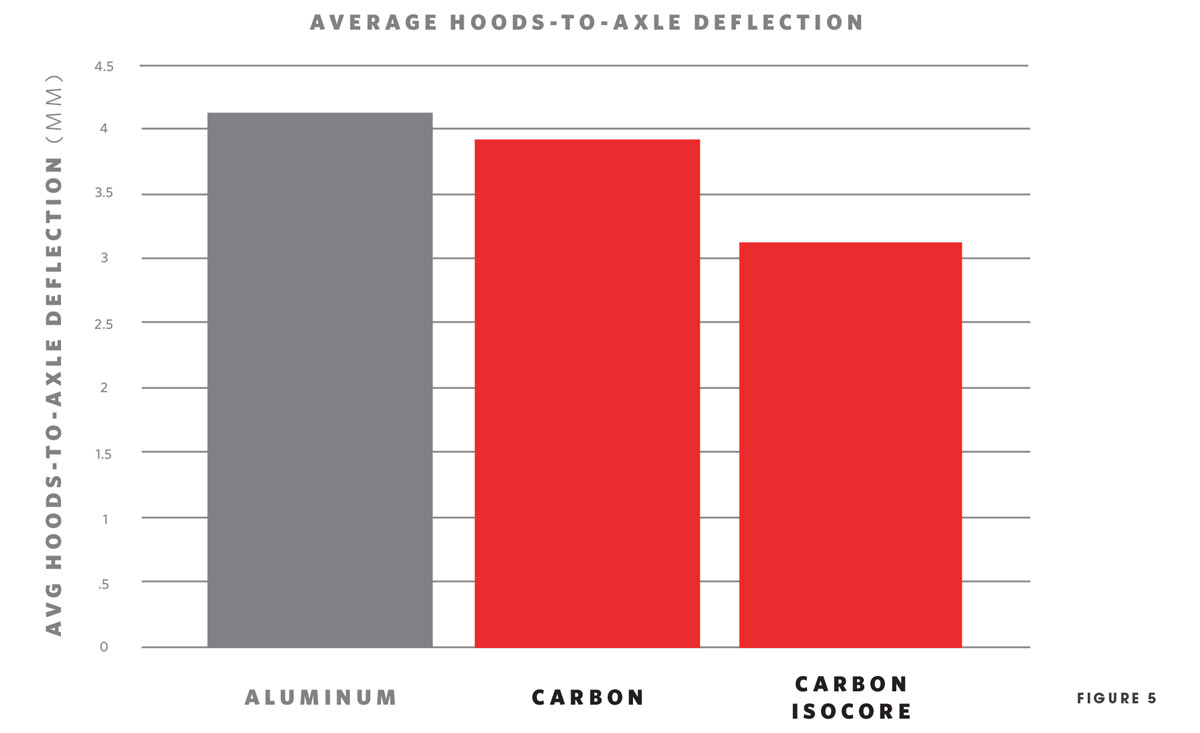 The new Domane ulilizes Trek's new IsoCore handlebar. It combines the compliance and established IsoZone pad comfort with a new vibration-damping system. A rubber compound is included in the carbon layup at specific locations to optimize performance, creating a constrained damping layer. This allows for the vibrational energy from the road to be efficiently dissipated before having a significant impact on the rider.